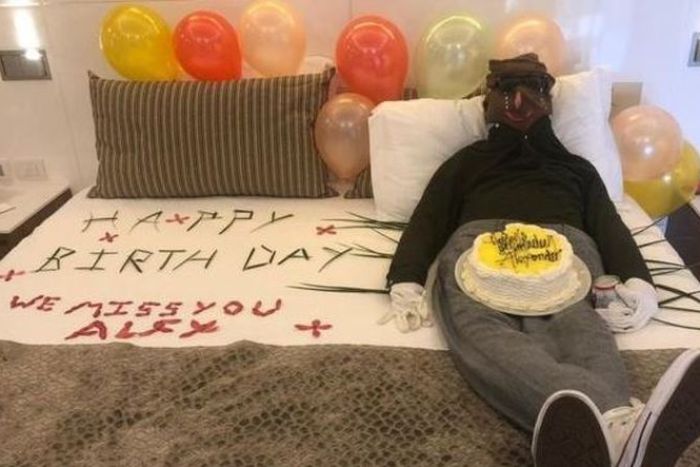 A Israeli tourist has been charged with kidnapping after a dispute with a currency exchange worker in Venice, Italy. The man tried to exchange $100 to Euros, but became increasingly frustrated when they gave him a bad rate. Apparently he pulled down the shutters to the booth and held the worker hostage for half an hour!

Jamaican Me Confused with Your ‘Kindness’

A family goes on vacation to Jamaica to celebrate the birthday of their deceased son, only to find that the hotel has commemorated their son in super creepy way.  They created a dummy made out of clothing stuffed with towels. They even used gloves and shoes to complete the figure.

The gesture was a surprise gone wrong, when the deceased man’s aunt wanted to do something nice for his parents. Instead, the hotel staff took it too far, even placing a birthday cake on the dummy’s lap and a beer in his hand. The mother and father entered there room and were shocked to find the dummy sitting upright on their bed, with the message “Happy Birthday. We miss you Alex” written on the bed in flowers.

Imagine coming back to your hotel room and finding this on your bed. Major fail! Full story link: https://www.bbc.com/news/uk-england-46475631

On December 29th 1972, Eastern Airlines flight 401 is about to land in Miami. The crew is making their descent when they notice that a light that signifies that the nose gear is down, isn’t lighting up. The crew puts the plane in autopilot while they fiddle with the light. It’s believed that at some point, the pilot leans over to fix the light and accidentally knocks the yolk, disengaging the autopilot. The plane starts dropping altitude and eventually crashes into a swamp in the Everglades.

It’s the first jumbo jet crash in the world and the largest aviation disaster in US history at the time. 96 passengers are killed, as well as 2 flight attendants, the pilots and the flight engineer. Besides being a horrific tragedy, what does this have to do with Halloween?

Well, shortly after the crash, rumors of paranormal activity on other Eastern Airlines flights start circulating. Passengers, flight attendants and pilots reported seeing the ghosts of Captain Bob Loft and Donald Luis Repo, two members of the crew of flight 401. The creepy things is that all these appearances were reported on planes that had salvaged parts from the crashed flight 401 plane!

In June of 2014, a 28 year old German man named Lars Mittank visits the coast of Bulgaria with his friends. One night while out partying, he gets separated from his friends and ends up in a fight with another group of Germans. He gets popped in the ear and goes to the hospital with a ruptured ear drum. He’s prescribed an antibiotic and told that he can’t fly for at least a few days. Because he can’t fly, he’s forced to miss the flight back with his friends and stays in Bulgaria for a few days by himself.

While staying in a hotel by the airport, he calls his mom and starts acting strange. He tells her that he’s in danger and possibly being followed. He starts whispering on the phone and acting paranoid. He later texts her the name of the antibiotic he was prescribed to learn more about it.

Finally, the day of his new flight, he goes to the airport and checks in at the airport doctor. They tell him that he can fly, but he starts acting erratically. Without warning he jumps up and runs out of the airport without any of his belongings. He runs outside, jumps a fence and runs into an area of trees. He’s never seen or heard from again.

There have been lots of speculation to why he suddenly started acting erratic. It was later found out that he never even picked up his antibiotic prescription, so blaming the medicine doesn’t hold up. Some believe he suffered a brain injury from the fight, others wonder if he was actually being followed. There have been reports of possible sightings as far as Canada, but it’s always been a false lead.

Watch the video of Lars running out of the airport below:https://www.youtube.com/watch?v=VsqATIHqAqg